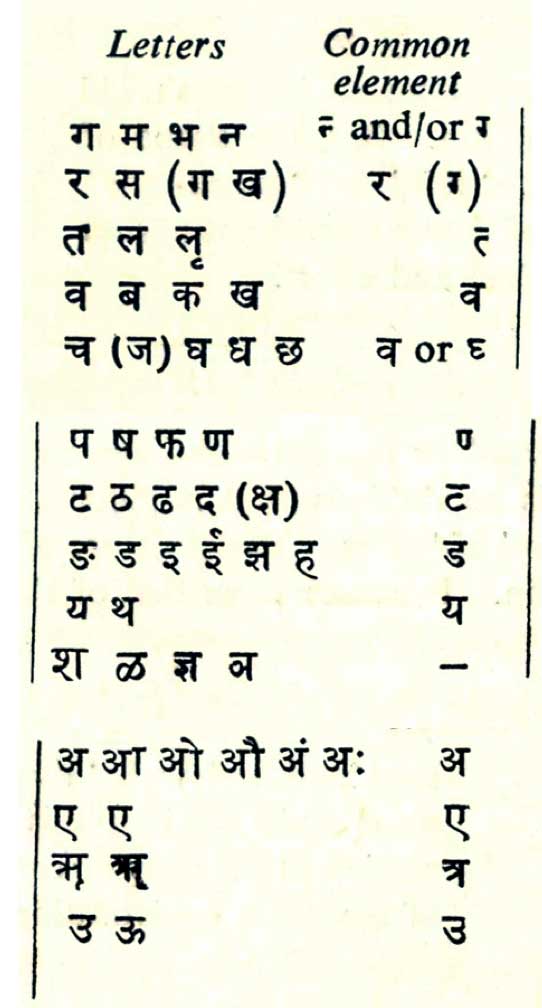 In the Latin script, designers have identified letter shape groups that contain similar elements (such as: nmhu, bdpq, vwy, ce), which are often treated very similarly in the typeface design process.

In his paper, “Anatomy of Devanagari Typefaces“, PhD researcher Girish Dalvi references the work of S V Bhagwat, who has attempted to categorize the main consonants and independent vowels of handwritten Devanagari into the shape groups shown above. (Unfortunately this diagram shows a typeface, not handwritten letters, but I will search for a good example!)

I find Bhagwat’s breakdown helpful for typeface designers and calligraphers as a starting point to attempt to find commonalities between forms – but not definitive. The first person to design a good typeface that uses only those common elements on the right-side, with no modification, deserves a medal of honor! If you look closely at the forms, you might find that there are proportion differences in the common element from one letter to another.

Girish Dalvi’s paper was published in the IDC publication “Design Thoughts”, and can be read in .pdf form here.